In this article we’ll look at the impact of the rotation of the cam on the dynamics of the valve train. For most road riders understanding the cam dynamics is of purely academic interest as a Velo OHV valve train is well designed and it is unlikely they will experience any problems. However, for those owners who race or want to use the full performance of their engine on the road it can be critical as a common source of failure is either significant cam wear, valve breakages (due to high impact loads) or the valve making contact with each other and / or the piston.

A cam rotates at half engine speed and in doing so the cam generates a rotational velocity relative to the followers. More importantly the as the cam follower begins to be lifted by the cam, it produces lift which produces a lift velocity.

If we could design a perfect cam (which we can’t), it would have a constant velocity profile, which would produce no acceleration. It’s this acceleration, which produces the force that either causes the valve train to lose contact with the cam (valve float) or create destructive forces on the valve train (cam, followers, pushrods, top rockers, valve springs and valve).

Modern engine designers go even further to look at the rate of change of acceleration, which is called Jerk and the rate of change of Jerk….however for our interests, we’ll only look at lift, velocity and acceleration. Similarly, cam designers over the years have used different equations to generate lift curves such has harmonic, sinusoidal, polynomial to achieve their desired cam dynamics. Again, this is beyond the interest of most of us.

To analyse valve dynamics engine designers use powerful computer programmes, which calculate the lift, velocity and acceleration every degree of rotation or less. For this analysis I’m grateful to Ingbrigt Valberg who not only provided a spreadsheet, which I’ve modified to perform the calculations every five degrees of crankshaft rotation, but also reviewed this article. Even when calculations are made at every degree of rotation, the minor variations in measurements produces ‘noise’, which professional programmes ‘smooth’ by applying what are essentially a series of averaging calculations.

So let’s start looking at the dynamics, which purely for consistency and ease of comparison I have only shown for the inlet lobe of the cam.

Looking at the acceleration graphs that follow you will notice that acceleration and therefore the resulting force has both a positive and negative component. The positive component during the first part of the lift curve exerts a force via the cam follower on the cam. At the point it passes through the zero axes, this force changes to a negative force i.e. the valve gear without spring pressure would attempt to loose contact with the cam. Where the forces are positive the valve gear is said to be under the control of the cam, when the forces are negative, the valve gear is under the control of the valve spring.

You will recall from the last article that the M17/2 had an almost identical lift profile to the M17/3, with the exception of the later cam having quietening ramps. The following lift, velocity and acceleration diagrams shows the effect of the ramp. 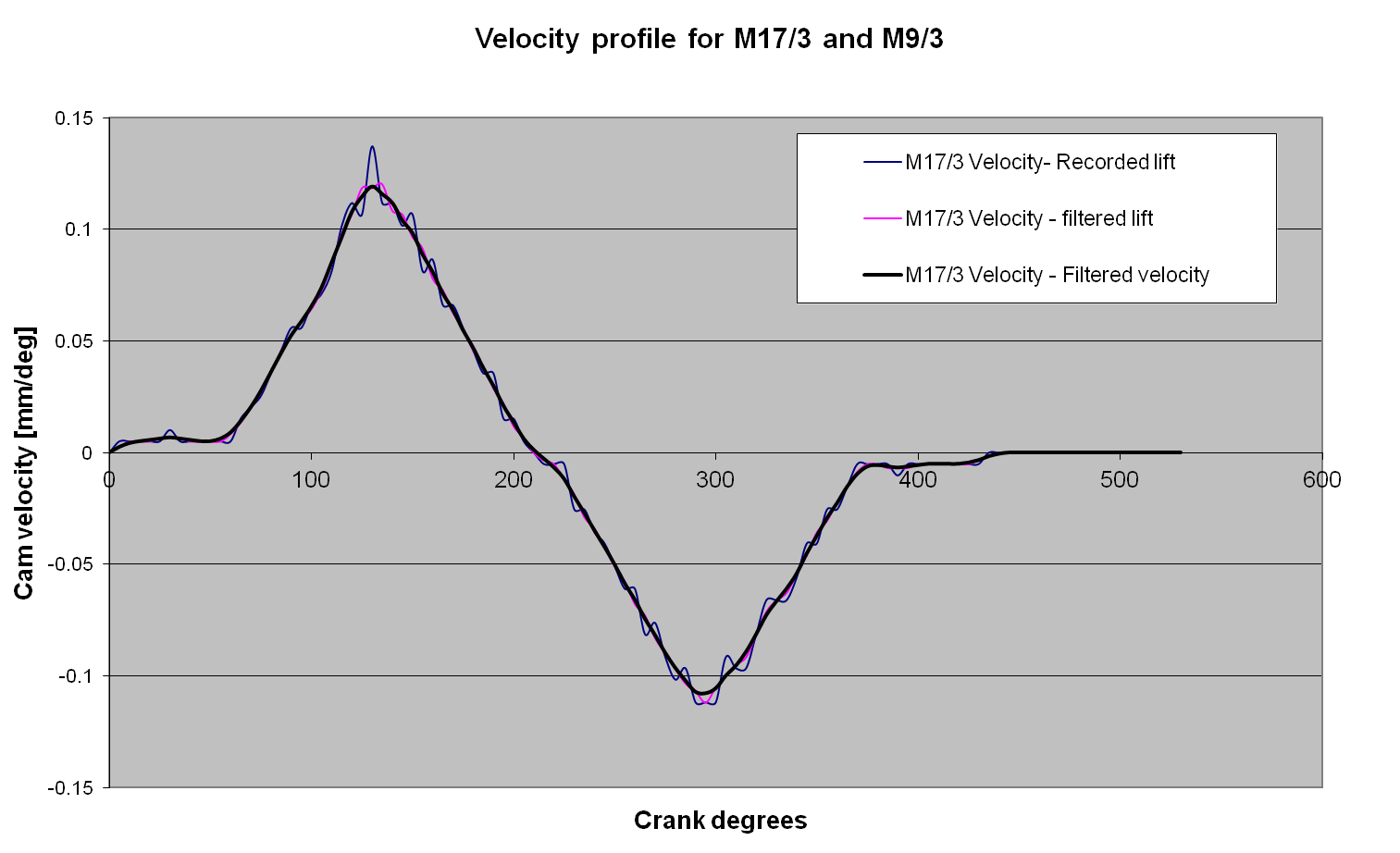 The velocity diagram clearly shows the effect of the ramp in the early part of the lift curve, but the overall velocity curve and maximum velocity is similar.

Next we'lll look at the effect increasing the dwell of the cam, but keeping the lift up and lift down profile similar. For this we will compare a M17/8 cam together with a modified M17/8 which has been reprofiled to increase the duration.

As you would expect the velocity and acceleration curves are similar, however we can clearly see that the cam has been modified by increasing the dwell of the cam slightly at the highest lift point, which produces a drop in acceleration at at about the 260 degree mark.

What the graphs above clearly show is that compaired to a M17/8, the additional lift and extended dwell of the Polydyne cames comes at the price of much higher acceleration. This is particularly noticable on the negative portion of the accelleration curve where the valve gear is controled by valve springs. What can also be seen from the lift, velocity and acceleration curves is the impact of the large dwell period at about 260 degrees wchic reduces the acceleration to zero. Obviously if you are using this cam for racing it would benefit from lightened valve gear and a set of valve springs whose force chareteristics better match the acceleration profile of the cam.

Finaly, lets look at the profiles of the first M series cam Veloce designed, the M17. Hopefully by now you can interperate the curves yourself. What’s interesting is that the maximum negative acceleration where the valve gear is under the influence of the spring is a similar value to the M17/2, 3 8.